As of Sept. 2022, we have written three grants on behalf of the French Cable Station Museum.
This building is one of Orlean's most significant historic landmarks. It is an authentic undersea telegraph station housing one of the world's largest collections of undersea telegraphy equipment.  A cable nearly 3200 miles long ran directly from Orleans to Brest, France. The station closed in 1959.   A small group of Orleans citizens managed to purchase the station and all of its contents from the French government in 1972. The museum is run entirely by volunteers who provide guided tours during the summer season. The museum celebrated the 50th anniversary of it's establishment this summer. Additional volunteers are always needed! Click here to contact Joe Manas, museum President. 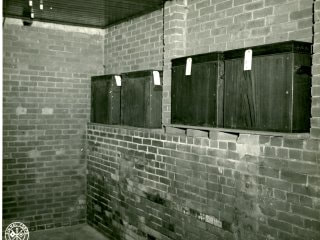 The Town of Orleans Community Preservation Committee has provided over $160K to fund much of the work done by us, and other outside contractors from 2019 to 2022. This includes new HVAC systems, updated electrical wiring, window restoration, mold remediation, creation of an online database (with photos of equipment and artifacts), restoration of photographs and documents, and the conversion of a room in the basement into a library for storing and researching the historic documents and more.
You can see the online version of the database here.

Library:
In our review of museum minutes and reports, we came across letters written in 1993 between Laurie Gray (curator) and Ms. Jessie Bell MacDonald (librarian).  They shared a concern regarding the long term archival storage of the documents spanning the years from 1898 until 1959 when the station closed. Mr. Gray specifically mentioned the idea of using a room in the basement for a library.

The room he referred to was formerly used to house what was referred to as “the artificial line”.  Built before there was such thing as “climate control” the room is enclosed by brick walls, separated from the foundation so as to be insulated from the cold damp earth.  The equipment that had been used there was extremely sensitive to variations in temperature and humidity,  so the room was kept sealed as tightly as possible.  The recent addition of another mini-split has allowed for converting the room into a climate controlled library that will house all of the museum’s historical documents, manuals and books.

An “office in a closet” has been constructed using repurposed doors and cabinets that are actual artifacts of the museum.  Behind the doors there is a desk with a computer, printer / scanner, and book shelves. A pair of teak cabinets have been repurposed to safely house the historic documents. In the main part of the room there is a large table, a small desk and good lighting.  This provides a comfortable, quiet workspace available year round.  Researchers, teachers and students, as well as museum volunteers will have access to the historic materials.

My relationship with The French Cable Station Museum is probably similar to many others living, working, or visiting on the Lower Cape.  As a business owner in Orleans for over 25 years, I must have driven past it thousands of times, never taking the time to stop in and have a look.  It was only a few years ago that I actually set foot inside. The reason I finally did so was to pick up my teenage daughter on the last day of her duty that summer as a greeter at the Museum.  Just for fun, and mostly to see her in a capacity I’d never witnessed before,  I asked her to give me a quick tour. She did a great job, and I was hooked!  Now, as my family has become more deeply involved with the Museum I ask people, “Have you ever been there?”  More often than not the reply is, “No”.  This simply should not be, and here is why:

Walk through the front door and you’ll suddenly, almost startingly, be taken back to a place in history  that holds so much importance to our nation (and to France as well).  It is a visceral experience, entering a time capsule into the early beginnings of modern communication technology beginning in the 1890s.  All the intricate equipment in front of one’s eyes is the real stuff of what was not so long ago the “state of the art”.  Even without understanding anything about the technology, it is obvious that the building and its contents are a testament to the incredible imagination and dedication of the innovators, engineers and operators who served there until 1959 when it was taken out of operation. We’ve come a long way from dots and dashes, but it was the work and innovation by those who occupied these rooms that helped set the fast pace toward the technology of today.

Hidden within the musty old file cabinets there are bits and pieces of the stories of the people from France,  The French Island of St. Pierre (off of southeastern Newfoundland, Canada), and the US who lived and worked in the station before, during, and after both WWI and WWII. They describe the events of the day and give a real sense of the dedication and hardships of many of the people affiliated with the station. Their work was extremely tedious and their performance was carefully monitored, with penalties for mistakes. There are hand written technical documents and instructions, electrical schematic drawings scrawled on fragile 100 year old paper, letters in English and French, some marked “secret” and “restricted”, there is even a letter from an FBI agent to the superintendent of the station at the outbreak of WWII warning staff to be on the lookout for potential spies. The US Army shut down the station in 1940 when the Germans took control of the French end of the cable, and most of the hardware was removed and shipped to NY until after the war. An interesting footnote is the fact that unbeknownst to the US or French, the English “borrowed” the cable in 1941, re-routing the Orleans end, hoping to create a direct link from the Canadian Maritimes to England. They were unable to “borrow” the French end due to German submarines  patrolling the French coast.  This came to light when the captains of two cable laying ships (English and French) had a conversation in 1949.

The equipment inside the various rooms is beautifully hand crafted from brass, wood and copper. Some instruments are extremely rare, and in remarkably good condition considering the climate and proximity to the sea. It is said to be mostly as it was during the operation of the station. Spare parts are strewn about, some labeled in both languages, tools still in their drawers. The desk, clock, electric fan, and telephone in the Superintendent's office are all original and sitting where they might have always been. Electrician (later Superintendent) Orlando Snow’s pipe is still on top of a desk in the repair room where he left it in prior to his death in 1950.

Our goal has been to preserve this hidden treasure. The French Cable Station Museum is a “must see” destination for the local population and visitors to the Cape from all over the world.  It is truly a national treasure worthy of preservation. We feel privileged to have been given the opportunity to contribute to the long term survival of the building and artifacts within.